The Derek Lewis Foundations is partnering with the American Beverage Association and America’s prominent beverage companies who are working together to support your efforts to balance what you eat, drink and do. DLF is also collaborating with other liked minded grassroots organizations in Central Arkansas and Little Rock to give consumers more choices and information.

DLF believes this will be a key to the success of creating impact and reducing childhood obesity in the state of Arkansas. DLF is promoting the message of balance throughout all its events in Little Rock.

Learn How to Balance Calories

Fighting Obesity in the State of Arkansas

The Derek Lewis Foundation is combating childhood obesity in the state of Arkansas. Obesity is a medical condition in which excess body fat has accumulated to a point that it can have a deteriorating effect on the individual’s health. The general cause of obesity is poor high-fat diets and lack of physical activity to burn calories.

The State of Obesity: Better Policies for A Healthier America showed Arkansas having an obesity rate of 35.9% compared to the nation’s lowest obesity rate of 21.3% in the state of Colorado. Obesity in America is a very relevant issue and has led to an increase in diseases such as, Diabetes, Heart Disease, and Hypertension among Americans.

Arkansas has shown a consistent trend of an increasing Obesity rate over the years and it is up to us as a community to help tackle this problem. 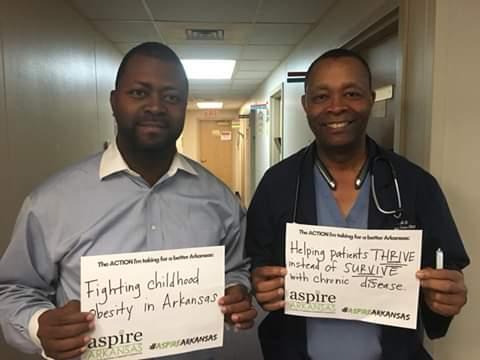